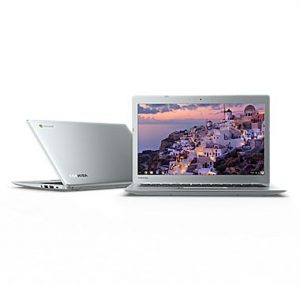 Super impressed with the 2015 version of the Toshiba Chromebook 2. Overalk, Toshiba continues to make very high-end Chromebooks, but the future is in doubt as it seems that Toshiba may be leaving the Chromebook business. The two biggest improvements in the newer Toshiba Chromebook 2 are first and foremost the processor and secondly the keyboard. The screen remains as impressive as in the 2014 version so I have no complaints there. The laptop is very similar to a 13″ Macbook air in size and weight. It’s plastic, which is to be expected at the price point, but it’s overall solid plastic with a non-slip texture to it. I like the build overall. The hinges worry me for long term, but they are also not the worst I’ve seen. Overall it’s not bad considering that you’re not paying for carved aluminum. Other information about Toshiba Chromebook 2

Other Information about Toshiba Chromebook 2

The new Toshiba Chromebook 2 has an i3 porcessor and this to me is the biggest improvement over the 2014 model. This things flies now. No longer does it stutter when multitasking. It may be just a plain Celeron to some but this not a processor you simply dismiss as mediocre. It gets the job done and does it well.

The keyboard is the next noticeable improvement. The travel on the keys is awesome and when compared to the crappy keyboard on my Lenovo U530 the typing experience on the Toshiba is heavenly.  Feels good, almost like a macbook keyboard (a compliment) and it’s backlit too. The specs boast of a backlit keyboard and technically it meets the minimum qualification but it is incredibly dim and a negligible upgrade to say the least. The trackpad works as expected. I’m not much of a trackpad user so any of its shortcomings do not affect me.

Overall the Toshiba Chromebook 2 is worth every penny. The 1080p IPS screen, Broadwell processor and keyboard totally make this a viable contender as the top Chromebook of 2015. It’s a bright IPS 1080p display. It’s better than displays found in much more expensive laptops. It’s not as good as the retina macbook pro I have… but that costs ten times as much, and the gap between them is closer than it has any right to be. Meanwhile, the screen easily bests that of a 13″ macbook air. In terms of other hardware: If you are on the fence about this laptop don’t be. Feel free to make the jump and I can almost guarantee that you will not be disappointed.

Without a doubt in my mind, Google’s own Pixel aside (which is way overdone) this is the best Chromebook I’ve ever experienced and this is coming from someone who, if anything, is not a friend of Toshiba as I had some issue with a laptop under warranty a few years ago and I did not appreciate how I was treated. But I have to be objective so, yes, it’s a great product.