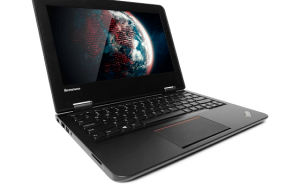 Hitting the market in June 2014, the ThinkPad Yoga 11e is definitely a unique Chromebook. Overall, it is one of the more impressive Chromebooks currently available to consumers due to its wide variety of features. The combination of a great touchscreen display, convertible tablet feature, and powerful performance set it above the crowd. One slight con is that it is kind of heavy for a tablet, but most users can manage until something better comes out.  Right now, the ThinkPage Yoga 11e is about as good as it gets. However, be prepared to pay a little more for this added functionality and uniqueness.

The newer processor really is really nice and faster than most other Chromebooks out there.  Although the software does not have a Haswell, with its higher-end quad-core Celeron N2930 CPU and 4GB of RAM, the Yoga 11e Chromebook is zippy and can perform all normal computing tasks with great speed.

One thing related to this faster processor and RAM is that battery performances is a little less than other Chromebooks. This could be due to the Yoga’s screen being a little different that most other Chromebooks and the larger processor.  Users can expect about 7 hours on this battery under ordinary use. It is also possible to swap the battery from this Chromebook which could make it attractive to certain users.

The Yoga 11e has almost all the Chromebook features that we expect. There’s an integrated 720p HD webcam, one HDMI 1.4 port, a USB 3.0 port, USB 2.0, and a 4-in-1 memory card slot. The keyboard, typing surface, palm rests, and track pad are excellent. Lenova has been known for having great builds for the past 20 years and this does not change when it started making Chromebooks. In fact, the Yoga 11’s keyboard is one of the best laptop keyboards I’ve ever typed on. However, one set back is that it does not automatically turn off when the computer is in tablet form. This can be a minor annoyance and might be fixed with a software update in the future.

The Yoga 11e feels solid and does not bend like some other models and makes.  Even though the laptop is made from plastic, it certainly does not feel like other plastic computers. It would be nice if a metal version came out in the future and the computer would feel more like Apply products. Overall, this design is slick.

The touchscreen and tablet functions of the Yoga make it really stand out from other Chromebooks with touch a touch screen feature. The Yoga 11’s innovative design and touchscreen display allows the screen to flip all the way around, fit snug against the bottom, and operate like a tablet.

The 11 inch screen is extremely good for a device this size and very easy on the eyes for extended typing sessions. The high resolution will make this device suitable for most users. For example, text and pictures are crisp and the range of colors displayed is excellent. The touch screen feature is fast and using it is responsive like using most modern touch screen mobile phones. There does not seem to be a difference from this touch screen and the touchscreen of other tablets. One nice feature is that you can push the Yoga 11e’s display back about 300 degrees to use the system as a stand-supported slate.

This Chromebook is definitely a great purchase if you are looking for a more high end Chromebook with more features than the competition. The combination of an affordable price and powerful features make this a top contender for new Chromebook purchasers looking at higher end models with 11″ screens.

Compared to the Toshiba 2 – While smaller (11.6″ vs 13.3″) and lower resolution (Toshiba is 1080p), this model has exception build quality plus that Yoga versatility and a touchscreen. Looking at this computer along with the Dell Chromebook and Toshiba 2, this has been one of the single best reviewed Chromebooks on the market.

ComputerWorld – “…Yoga 11e will give you an awesome overall experience that’s a meaningful notch above the rest”http://www.computerworld.com/article/2598327/computer-hardware-thinkpad-yoga-11e-review-a-hidden-chromebook-gem.html

Notebook Check: “…definitely consider the ThinkPad Yoga 11e for its superior longevity and exceptional display for the price” http://www.notebookcheck.net/Lenovo-ThinkPad-Yoga-11e-Chromebook-Review.124664.0.html