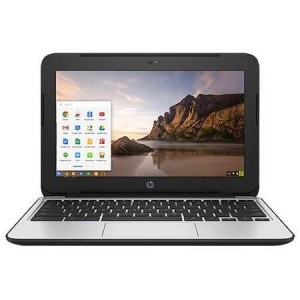 Although the HP Chromebook 11 G4 still not officially announced, on the manufacturer’s website, but all details of the device and some photos, which suggest that the new model is equivalent to the previous find. Official product images are still pending. The data sheet reveals at least all details about the facilities, which now includes a cellular modem and an IPS screen. Hewlett-Packard wants to revise the fourth generation of its 11-inch Chromebook externally hardly so that further a plastic casing is used. The display is 11.6 inches tall and basically continues raising with 1366 x 768 pixels, is new but also a variant with IPS Panel will be available. The surface of the screen is always dull in both versions. More information about the HP Chromebook 11 G4 P0B79UT or P0B78UT

The platform consists again of Intel Atom N2840 dual core SoC reached clock rates up to 2.58 gigahertz 2.16 gigahertz and TurboBoost. There are also two or four gigabytes of memory, combined with 16 or 32 GB internal flash memory. Each 5.1 GB of it going to die for the operating system. Google bought 100 GB Google drive also for two years. Another important innovation is that not only Bluetooth 4.0 and recently Gigabit Wi-Fi is offered, but also a variant of Chromebook 11 G4 with HSPA + and LTE is planned. Accordingly, an additional SIM card slot located on the housing. Whether here also bundles with HP DataPass and the corresponding 200 MB of free data volume per month over two years will be offered, is unknown, although this option would be certainly interesting.
Otherwise have a USB 3.0 – and a USB 2.0 port, a 720 p webcam, an HDMI output, and an SD card reader on board. The battery brings it to a capacity of 36 Watt hours or 3400mAh. It is powered by a proprietary connection per 45 – or 65-Watt AC adapter. Weight and thickness is apparently unchanged with 1.28 kg and 20.45 millimeters. Price we go 11 G4 according to dealer listings already at $ 219 at the HP Chromebook, where just the versions with more memory and the new LTE modem will be certainly more expensive. When the new Chromebook by HP will be officially presented and available on the market, is still open.