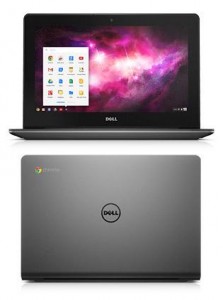 Dell finally entered the Chromebook game in January 2014 with a very solid machine. The build quality and performance are superior to just about everything else out there. Construction is surprisingly sturdy, and the device doesn’t feel “cheap.” It’s a nice solid weight; not too heavy, but not light enough to knock around. Even with a price slightly about the Acer C720, this Chromebook might be a win for those looking for a slightly more refined look.

The battery lasts about 8 hours when running a wide variety of applications. Should be enough for most users to go call day long without charge.

The build quality seems great, and the design is very class. The Dell Chromebook is definitely trying to appeal to Windows/PC users who are just starting to dabble in ChromeOS. One thing to point out is that the hinge is strong, although there is no locking mechanism when closed, the device itself is very solid and is quite a bit heavier than I would expect from just looking at it.

It is particularly nice that the keyboard is much nicer than the Acer C720. Not bouncy feeling and quieter. The track pad is about equal I think, but the “click” on the Dell is quieter, more solid feeling.

How long does the Dell Chromebook 11 battery last?

In numerous tests, the Dell Chromebook 11 shows an impressive 8-9 hours under standard use that includes web browsing, some videos, and using Google Docs.

The Dell Chromebook 11 has a small screen, but good screen resolution.

Even though it is marketed primarily to students, this is an excellent Chromebook for just about anyone and one of the top ones on the market.