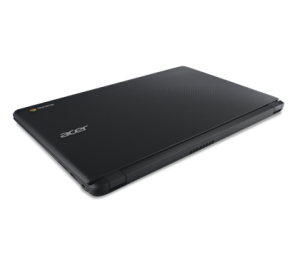 I upgraded to this Chromebook from the 11″ C720: Acer C720 Chromebook (11.6-Inch, 2GB)(which is an excellent device by the way, I just needed a bigger screen). I initially went to the 13″ Acer Chromebook: Acer Chromebook 13 CB5-311-T7NN (13.3-inch HD, NVIDIA Tegra K1, 2GB)and I was so unhappy with that one that I ended up returning it (screen was dull, performance was slow, case felt flimsy, and battery life was bad).

Compared to the 13″ which felt like it was going to crack if you picked it up by a corner, this 15″ laptop feels sturdy, and although 1.5 lbs. heavier (at just under 5 lbs.) you are able to lift if with one hand by the corner of the laptop without it flexing much.

Although it isn’t super sharp and bright, it is brighter than the 13″ Acer Chromebook, and displays videos well. However, if you plan on using this outside under bright sun, you will might have a difficult time seeing the screen, even at the highest brightness setting.

The speakers sound pretty loud for personal use. I like that they are on the front of the computer next to the keyboard, so the sound is less likely to be obscured by the laptop casing. The touch pad is fairly responsive. The computer performance is adequate for regular web browsing.

There is not too much of a difference between the 2GB of the C720. However, the important stuff works well, and I am currently running with approximately 20 open web tabs (mainly news stories from various sites) and although there is a slight lag when I right-click on a link to open a new site in a new tab, it is handling the load pretty well (and I have had as many as 45 tabs open without too much lag!)

Battery life:  Battery life appears to be on par with what I expected. I have been using the laptop during this current session for exactly 2 hours, with the screen brightness at 100%, and browsing the web and checking emails. Starting from a full charge, I still have 74% of battery left, and it estimates 5 hours and 11 minutes are left. So based on that, and on my prior use of the laptop, if you had your screen fairly dim and had the WiFi off (which is impractical unless you are just typing a document offline) I could theoretically see the battery life making it to the rated 9 hours (or more). Otherwise, I think 6-8 hours of battery life can be expected with normal use.

I’ve noticed a humming noise recently, it sounds like a fan. I was under the impression that Chromebooks were fan-less (at least the prior two that I owned were). However, it is so slight that I only noticed it coming on and off very late one night while using this computer (when my entire home was completely silent). I don’t really hear it during the day when there is any other noise in the area.

Overall impression: This is THE Chromebook that I was waiting for. It is perfect for most computing needs. I still love the C720 for its compact size, excellent battery life, and because it is so lightweight, but for working and extended reading/emails/browsing, this 15″ laptop is the way to go. I highly recommend this Chromebook (or the more expensive full HD version if you prefer the better screen).