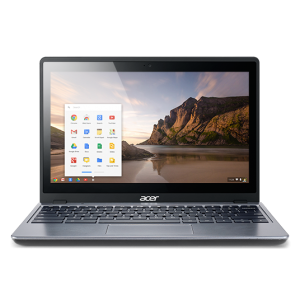 Originally released in late 2013, the Acer C720 has quickly become of the most popular and common Chromebooks. It is very similar to the HP 11 and most purchasers are usually considering buying one or the other. In daily usage, the C720 is speedy and responsive for most basic tasks but definitely not a laptop to replace a normal computer. One slight problem is that the keyboard is of poor design and deteriorates with extensive use. Overall, with 8.5 hours of battery life at only 2.8 lbs for roughly $200, this Chromebook is definitely a winner for those looking for their first Chromebook or a laptop to compliment their full service desktop/laptop PC.

Performance of the Acer C720

This Acer Chromebook turns on quickly thanks to the SSD (as almost all Chromebooks do) and performs well in general for most tasks. Its close competitor, the HP 14 uses the same CPU, memory, and storage as the Acer c720. With the Acer though, you get the same extra performance, but you still get a low grade screen and crappy sound. Multiple tabs and apps open the machine has never gotten extremely hot or shown any signs of slowing. Some users consider the HP, on the other hand, is thinner, cooler, dead silent, and has a far superior screen. Sure, it isn’t as fast, but that just doesn’t seem very important. No need for the Haswell processor for most users.

The battery life is excellent and exceed that of most Windows laptops. Most users can expect about 8 hours from normal use. The Acer C720 will charge very quickly and this is a great plus for many users who are constantly on the go.

The build quality of the C720 is excellent for its low price point and features.  Although the case is made out of plastic, it is sturdy and does not bend too much as other laptops do. You really get what you pay for and if a sturdier or metal case is needed, a more expensive laptop may be needed.

One downside to note is that the touchpad on the Acer isn’t the greatest at tracking user movements. But with the touchscreen, it feels very natural to tap and scroll through Chrome OS because the screen resolution is low enough that menus and buttons don’t feel too small to tap with the touchscreen. The material the trackpad is made of is not nearly as nice as one you’d find on a Mac, and your finger tends to stick to it a little.

The track pad and keyboard are a bit loud to use. This can be annoying. Additionally, the keyboard has been no to show signs of wear and act differently even after a few weeks of use. One nice feature is that the touch pad is great and actually turns off when you type so you don’t have to worry about the cursor moving when your palm brushes the computer.

The screen is amazing for a Chromebrook. The screen appears ultra bright when using it inside and is definitely possible to use it well outside. The 11.6 inch screen might be a little small for some users, but this appears to be the standard. Users wanting a bigger screen should investigate HP and Toshiba Chromebook Options.

Overall, the touchscreen panel Acer put in is very responsive, and it feels like using any other Android tablet or iPad. It a nice functionality that will change the way you interact with Chrome OS. Users should try out a Acer C720 and see how a touchscreen can really enhance the overall user experience.

Overall, this is one of the best Chromebooks available. When considering the low price, someone wishing to try out a Chromebook and ChromeOS would make a good choice starting with the Acer C720. Build quality, battery life, and fanless design are awesome. But the performance is not as good as some other Chromebook out there. So you just have to figure out where your priorities lie.