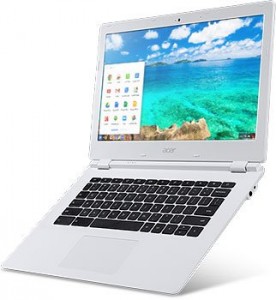 Acer has been dominating the Chromebook market by releasing high-quality, affordable, and reliable Chromebooks that stifle the competition. The Acer CB5-311-T7NN is no exception and is truly a great Chromebook. This is cbookreviewguide’s top chromebook pick for 2014 due to the speed and excellent display.

This is one of the fastest ChromeBooks out there in 2014. The NVIDIA Tegra K1 CPU has given the newest Acer Chromebook 13 a tons of speed even with the 2GB of RAM. The nvidia  graphics card upgrade will not affect most users as there are not many Chromebook apps that take advantage of this powerful graphics card in the Acer. The problem with the new Tegra based processor from NVIDIA is it’s the only Chromebook on the market right now using a Tegra based processor. Many Chrome app developers haven’t built their apps to be compatible with these CPUs. This will not affect mos tChromebook users except ones who are reliant on heavily specialized ChromeOS Apps

Going from the 11″ screen to the 13.3 inch screen is great, however, the new screen actually seems to be a bit darker and muddier than the c720, even at full brightness. The screen appears to be darker and a bit more muddier than the older c720. The best part is that it is Full-HD, which is nice but also has its drawbacks. For example, with the washed out and darker screen, it does make the font a bit hard to read at times unless you increase the font size by zooming in.

The case on the new Acer is still plastic, but it is pretty strudy and does not bend like other Acer models tested. Since it is white, simply throwing it in a bookbag or messenger bag results in visible scuff marks and scratches to the white finish.

The battery life upgrade from the Acer c720 is noticeable. Going from 7-8 hours to 11 hours (13 hours on the non Full-HD version) is great. Users should be easily able to power through a day of ordinary web browsing and Chromebook tasks.

Another thing I noticed after using the ChromeBook 13 for the past couple weeks is the battery life actually appears to be worse than the c720 even though Acer claims it has 11-hours of battery life vs. 8-hours with the c720. With the c720, I could go all day using Google Docs and some web browsing and still get home with about 65% battery power. With the Chromebook 13, I get home with about 40% remaining. Could mine just be flawed with a bad battery? Perhaps. But I believe it has more to do with the larger screen and new processor. (And this is with keeping the screen brightness on the lower side.)

I really feel that the Acer Chromebook 13 is an amazing machine that has addressed some upgrade requests from Acer users, although after spending some serious time actually using the new Chromebook, I am beginning to doubt some of the manufacturer’s claims. As I mentioned earlier, the screen, although now Full-HD and larger, is a bit darker and muddier than the older c720 Chromebook, and the battery in the new Chromebook, at least for me, is using noticeably more power and draining the battery faster than the c720 did, even though Acer is claiming a substantial increase in battery life due to the “power friendly” processor. The charger port is fragile and likely to be damaged or break for users on the go who are using the A/C adapter frequently as it is loose and wiggles in the port, unlike the c720 that had a very solid, tight-fitting port.

These are the major differences between the new 2014 Acer Chromebook Models.