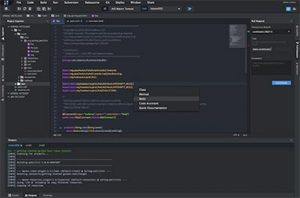 An online Chromebook IDE may be the best way for developers to code on a Chromebook. If you’re looking to make use of a Chromebook for developing, there are a few tools you might want to look into to make the job successful. It is important to find an online IDE that works well with Chromebooks.

Programming on a Chromebook

This article provides some insight into the best online IDEs for Chromebook and how to use Chromebooks as a developer’s tool.More and more offline apps are being made available for Chrome OS (like the Caret text editor) but if you are really serious about programming on a Chromebook, you’re going to want to install Linux. Chromebooks were practically made for it— it’s way easier than installing Linux on a Windows machine.

There are many different online IDEs such CodeEnvy, IDEOne, Codepad, Browxy, Jdoodle, JavaLaunch, Compilr, Codebox and ShiftEdit. Each of these online resources come with their own limitations in terms of how developers can use the. Commonly, there is no multiple file support, no user input support, no support for applets or no step debugging. That being said, these cloud based IDE services work well with Chromebook users who are fairly limited in their coding options. It may actually be the best of the worst.

Cloud9 This online has a great interface. Cloud9 is an online platform for development that makes developing applications more convenient than ever Cloud9 combines a powerful online code editor with a full Ubuntu workspace in the cloud. It supports more than 40 languages, with class A support for PHP, Ruby, Python, JavaScript, Go, and more.

CodeEnvy: Launch an infinite number of processes, one-click automation, customizable. Codenvy is a cloud IDE and developer workspace server that allows anyone to contribute to a project without installing software. Get sample projects and demos from their site. Languages supported: Ruby, Python, Go, Javascript, Django, and much more.

If you’re willing to work in the cloud, there are plenty of on-line IDEs that work well with a Chromebook. Each of these offers a full-blown IDE that will allow you to develop in nearly any language you need. Some of them are free and some require a subscription. Below are a few of the better cloud based IDEs that work reasonably well on a Chromebook.

Using Linux on a Chromebook to Code

This is probably the best option if you want to use Chromebook hardware. More and more offline apps are being made available for Chrome OS (like the Caret text editor) but if you are really serious about programming on a Chromebook, you’re going to want to install Linux. Chromebooks were practically made for it— it’s way easier than installing Linux on a Windows machine.

There are extensive guides that detail exactly how to install Linux on your Chromebook, but here’s the one I used: Crouton Installation Guide: Updated for Broadwell Chromebooks

Installing Linux eliminates almost every reason you wouldn’t get a Chromebook. The main things you won’t have access to are Adobe apps and video games, both because they aren’t on Linux and because Chromebooks aren’t powerful enough to run them.

SSH into a remote machine

One other alternative exists for programming on a Chromebook. SSHing into a remote machine provides access to command-line only tools, including editors such as Vim and Emacs. This might be the best options for users who are looking for a powerful, well known IDE.

You should see the Secure Shell icon in your list of apps. Click the icon to open the extension. Once it’s open, the extension is simple to use. All you have to do enter the username, hostname, port (all three are required), and then click the Connect button or hit Enter (Figure A).